Contents x
Lame servers - what are they and how does BIND deal with them?

Lame servers - what are they and how does BIND deal with them?

The concept of lame servers stems from RFC8499 and relates to a situation where something is not right with delegation.

Delegation is the act of giving away, or offloading, some portion of work elsewhere. In DNS, the specific meaning is to direct a querier to a different server, or servers, for all queries relating to a subset of the namespace that you own.

What is the DNS namespace?

The DNS namespace is an hierarchical organisation of domains, usually represented as an inverted tree: similar to the directory or folder structure of filing systems, where nodes lower down the tree (further away from the root) are children of the nodes immediately above. 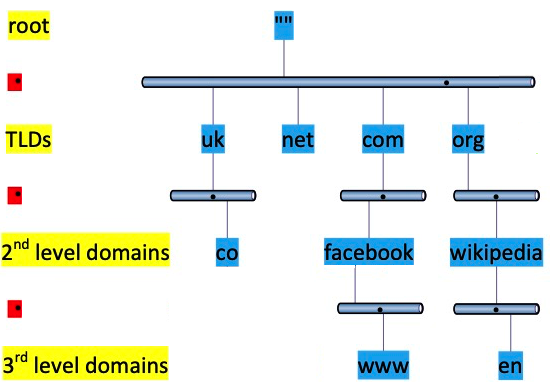 The people who run the authoritative DNS servers for the org domain delegate responsibility for (say) the wikipedia domain to them. This is done by inserting into the parent domain (org) DNS records of type NS, which point to the nameservers that are authoritative for the child domain (wikipedia). The people who run the wikipedia nameservers must also list the same NS records and it is at this point that problems can occur.

The way a recursive server finds answers for a domain is to start at the root and work down. It already knows how to find the root servers as these have well known IP addresses that change very rarely, which are compiled into the code.

The recursive server makes a query to a parent (e.g. the root) to learn information about a child (e.g. org). The parent responds with the NS records it has stored for the child: this is known as a referral.

The recursive server then makes another query to one of the child nameservers listed in the NS records returned by the parent.

There are three expectations in this exchange:

These situations can arise because the design of the DNS requires that the same information (NS records) be listed in two sets of places - the parent nameservers and the child nameservers - and typically these two sets of servers are run by different people, indeed frequently by different organisations. Human error can therefore lead to mistakes.

Cacheing of incorrect NS records by a recursive server can lead to anything from resolution timeouts at best to obtaining incorrect answers from bogus nameservers at worst.

BIND has always cached lame nameservers separately from valid nameservers and used this information to avoid making any more queries to the lame ones for a period of time - the so-called lame TTL. Specifically, BIND only flags a nameserver as lame if its responses are non-improving (type 1, from the list above).

Type 1 nameservers are cached as lame by BIND because they respond as if they should be able to provide useful information, but don't.

Type 2 nameservers are not cached as lame by BIND because it can't assume anything about a nameserver if it doesn't respond. After a timeout period BIND will retry, using a different nameserver.

Type 3 nameservers are also not cached as lame by BIND because nameserver responses to queries for unknown zones will be errors of some kind, e.g. REFUSED, which again allows BIND to choose a different nameserver and try again.

The BIND lame cache period was fixed at 600 seconds initially. But the lame-ttl option was introduced in version 9.1, allowing operators to tune their servers to better match the particular operating environment. The lame-ttl default value was chosen to be 600s, meaning that behaviour of the lame cacheing feature was unchanged, compared with versions of BIND prior to 9.1.

Following the discovery of the vulnerability now known as CVE-2021-25219 the lame cache has effectively been disabled. The lame-ttl option still exists, but the default value has been changed to zero and any user-set values are silently ignored.