BIND has two mechanisms for publishing usage statistics, the static 'named.stats' file and the statistics channel, which can be read over the network as XML or JSON data, provided over HTTP.

Zone statistics need to be enabled in the BIND 9 configuration file named.confusing the following statement:

It is also possible to enable the zone statistics only for selected zones by putting the same statement inside the zone block in the configuration:

Many popular monitoring tools offer modules to use the data in the named.stats file including:

Although the traditional statistics file is easy to use, there are a few challenges with this method.

The BIND 9 statistics can also be retrieved from a running BIND 9 server via the HTTP protocol. BIND 9 has a tiny built-in web-server whic provides the statistics data in XML or JSON format.

The statistics channel has some benefits compared to the older named.stats statistics file method.

The ISC BIND 9 packages contain the XML and JSON functions. 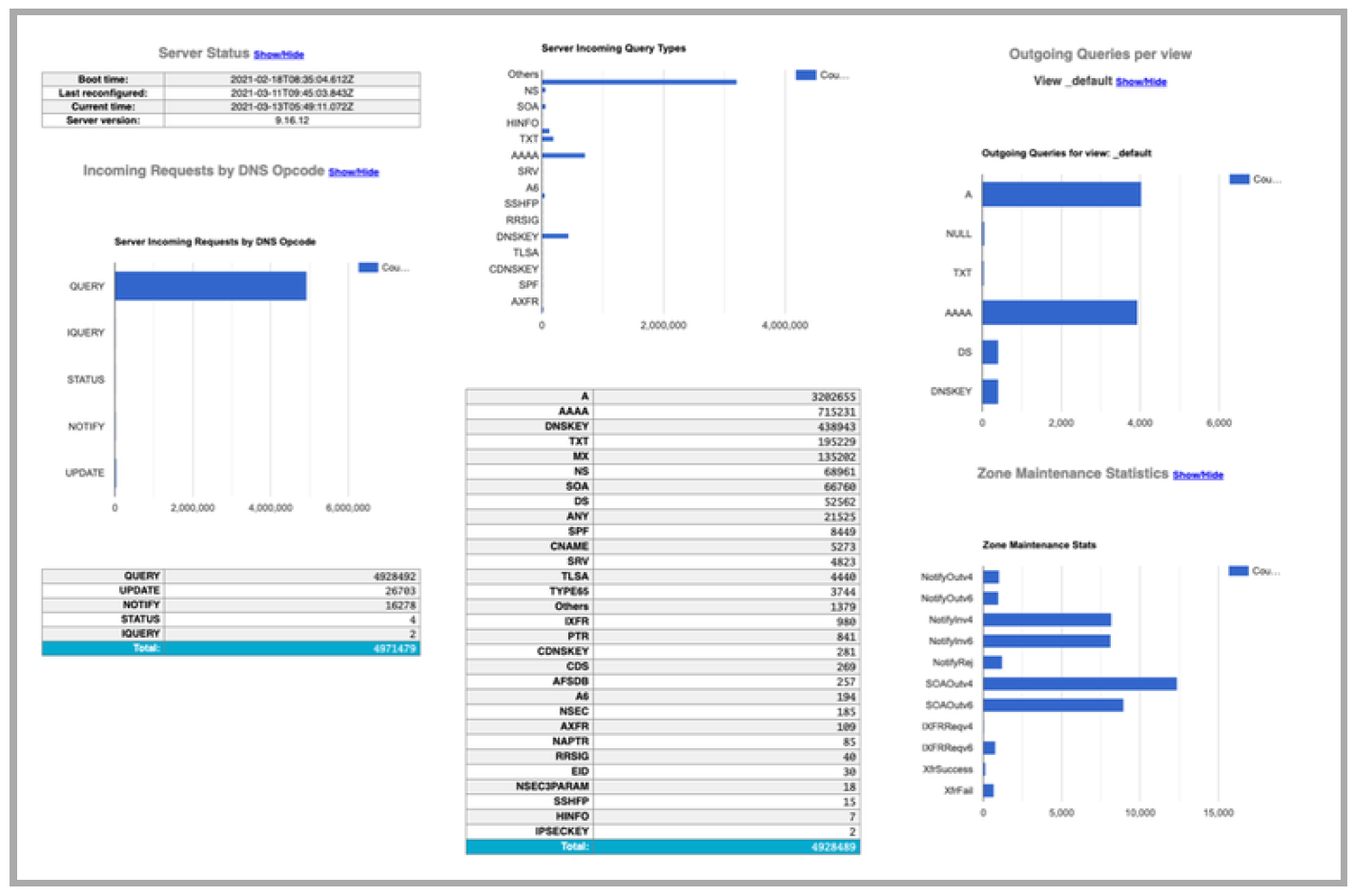 JSON (JavaScript Object Notation) is an open standard file format that uses human-readable text. JSON is faster to parse than XML and some (many?) people find JSON easier to work with than XML.

Security recommendations for the statistics channel

The BIND 9 statistics channel should not be exposed to the open Internet without authentication.

It reveals internal information that can be use to attack the DNS
server and it increases the application 'surface' for attackers.

Preparing to troubleshoot a resolver

When something goes wrong in a resolver, there are several major categories of data you want to examine. These include; memory usage and whether your cache is over full, cache contents and their age, query and response statistics, including response types, and the most basic, packets in and out. For most of these, you need some historical data so you can see when your current measurements are anomalous.

1. Cache capacity.
It's quite useful to know something about cache capacity and limits and whether or not you've reached them.

The 'Max' values are a high water mark (content will increase and decrease - this is the highest it has reached so far). The 'InUse' values are how much is in use now.

If this counter is zero, then max-cache-size has not ever been reached.

2. Cache content and cache record expiration.
RRs expire 'passively' - that is, they hold a timestamp that indicates whether or not they're still valid. Cleanup takes place periodically, but what this means is that there are counters of RRs divided into different RTYPEs. These counters are always going to be a bit out of date, because a 'passive' expiry isn't going to update a counter, plus expired content isn't remove immediately.

It can very interesting to know what you have in cache - particularly if there's a significant change that diverges from normal (that is, 'normal for this server). So for that reason, we recommend keeping track of the counts of the different RRsets - you can find these in the rdatasets block.

3. Queries and Responses.
It is useful to track the counters of what happened with the queries that named received. Those are in the Name Server Statistics section. There's some overlap between some of them (for example, a query could cause recursion, but then result in a SERVFAIL).

Establishing what's 'normal' so that you can recognise exceptions is a good way to operate.

But you can also track what you got back; referrals, FORMERRs, timeouts etc, as well as look at what the pattern of RTTs (Round Trip Time).

For most of these - including the RTT buckets, pull the stats and intervals and then by subtraction, monitor what happened over the interval period. That way you should be able to spot any unusual spikes such as timeouts or FORMERRs which might be a clue that you're receiving unusual client query traffic, or that something bad has happened out on the Internet.

4. Inbound and outbound packets.
You can count these from BIND itself, but we recommend also monitoring them from the server itself. Extra points for being able to track both sets in the same graph if you need to.

Recommended metrics to monitor for an authoritative BIND 9 DNS server

Note: This article is based on a March, 2021 presentation by Carsten Strotmann on monitoring BIND 9, along with other material. The recording is available in ISC's YouTube channel.