The purpose of this article is to help users determine how long a given ISC release is likely to be supported. This information is useful when deciding when to schedule a migration, or in some cases, to help determine which version to migrate to when updating.

For the most current information on the status of any particular software version, please refer to the software status listed on the downloads page. 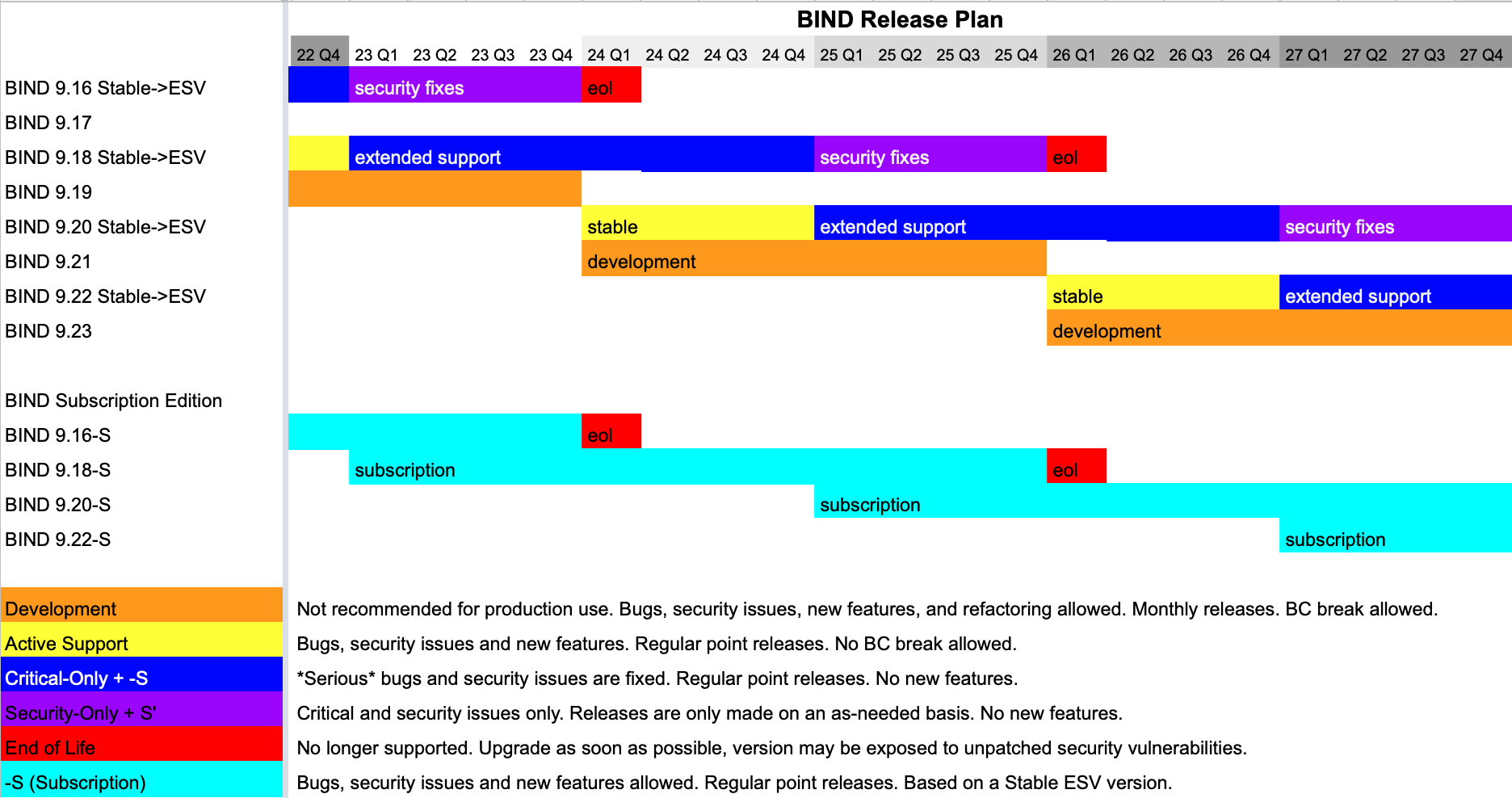 We release Development versions off of the current working (main) branch. These are the odd-numbered major versions, such as BIND 9.17, 9.19, etc.

We typically release minor Development releases monthly (e.g. 9.19.1, 9.19.2). Development version minor releases introduce new features and significant refactoring and may not be backward-compatible with their immediate predecessor. Development versions of BIND are suitable for those interested in experimenting with and providing feedback to ISC upon their features. There are no alpha, beta or release candidates published. This process has been replaced with development versions. It may sometimes happen that a recently-released minor version is superseded very quickly in order to address a flaw. We may not issue -P releases for Development versions with security bugs, at our discretion.

Stable branches of BIND get minor feature updates and bug fixes for 12 - 18 months, but then are put into Extended Support mode and receive only critical fixes and eventually, only security patches. Within a Stable branch, users should be able to update from one minor version to another without worrying about a break in backward-compatibility.

See the accompanying chart which shows when we plan to declare ESV status. For example:

Releases marked with a -S are part of ISC’s Supported Preview edition. These releases provide a deployable, supported vehicle for our support customers to receive early access to new features in development. The -S edition is created for and available to ISC paid support subscribers, and may also be offered to community developers for testing and feedback. The -S edition includes select unreleased software that ISC judges to be stable enough for production use. Features in the -S version may still be in development and may be changed or even removed by the time of the public release.

The -S edition releases are based on an ESV branch, and are actively maintained and patched in case of security vulnerabilities, just as our regular public releases are. The -S edition is offered under the same license terms as the open source BIND 9, but redistribution is constrained by the support agreement between ISC and the support subscriber.

The -S support plan is different from regular releases:

All supported versions of BIND 9 may occasionally receive unscheduled releases in response to a critical security bug; in that case, the changes introduced between that version and its predecessor are minimal and necessary only.

We have established a process for removing named.conf options. This is a gradual and phased process intended to provide ample notice of a coming change that might break an established configuration.

We have two types of major Kea versions: Development and Stable. At any given time, we should have three options available: two Stable releases and one Development release.

We typically issue Development branch releases monthly. These minor updates will introduce new and updated features and may not be backward-compatible with their immediate predecessor. Development versions of Kea are suitable for those interested in experimenting with and providing feedback to ISC, but are not recommended for production use. There will be no alpha/beta/release candidate versions of Development versions, and it may sometimes happen that a recently-released minor version is superseded very quickly in order to address a flaw. We may not issue patch releases for Development versions with security bugs, at our discretion.

Stable versions of Kea are fully supported for at least six months after the next Stable version is released. This means you should have ample time to migrate to a new Stable version before the older one is EOL. We do not yet have "Extended Support" versions of Kea; we still have a very high rate of new feature development and are not yet ready for a long-lived Stable branch. We expect to be able to update the Kea DHCP packages the same day we post the tarballs.

Stork is considered an experimental or best effort project. All releases should be regarded as Development releases. It is under active development and we cannot guarantee that there will not be backwards-incompatible changes at this time.

ISC is still supporting the DHCP server for existing technical support customers. There is no end date established for this EOL-support service.